As part of this endeavor, TCA, with the cooperation of mobile operators providing mobile phone and PHS services, created MRN in April, 2001, which voluntarily collects used mobile and PHS terminals, battery chargers, and batteries, mainly through the approximately 9,000 retail outlets throughout Japan, regardless of carrier or manufacturer. As of the end of FY2017, MRN had collected over 130 million devices.

Meanwhile, CIAJ established the “Environmental Assessment Guideline for Mobile and PHS Terminals,” in March, 2001 as a guideline for manufacturers to assess their products and promote the 3R activities (reduce, re-use, and recycle).

The actual figures for recycling in FY2017 are as follows.

The number of mobile and PHS terminals collected in FY2017 increased from the FY2016 figure by 400,000 terminals (7%). With the popularity of smartphones, consumers are holding on to devices that they no longer use for communication purposes even after switching to another model. In addition, the market for second hand devices (re-use) has taken root. Despite these trends, we will continue to focus on collection efforts by carriers. 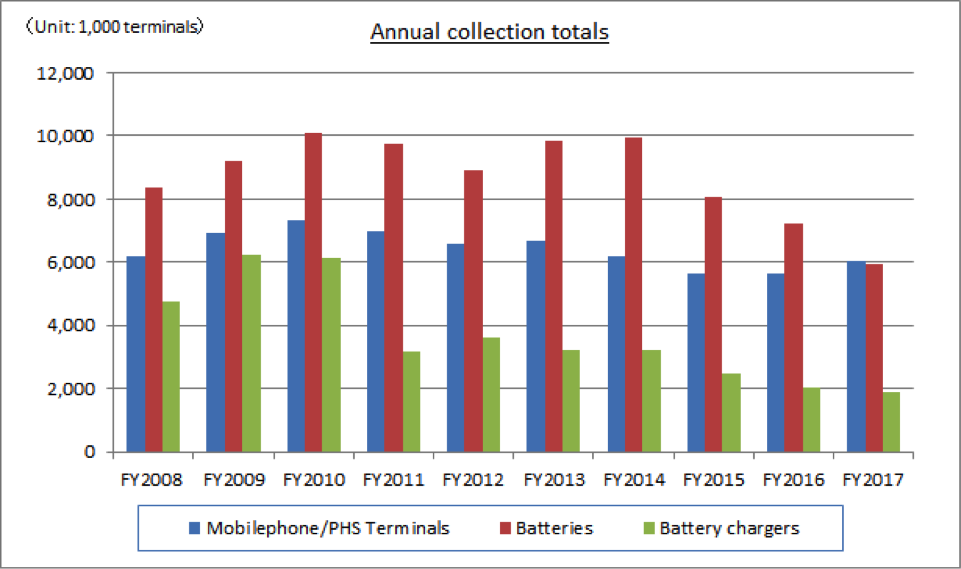 Metals used in mobile and PHS terminals include steel, aluminum, magnesium, gold, silver and copper. Gold, silver, copper and palladium are refined and re-used. The slug resulting from this refining process is used for road beds and shore-line tetrapods.

Non-metallic material (plastic, glass, etc.) are also processed for recycling. Plastics are dissolved at low temperatures into resins to be made into hangers, plastic containers, toys and other every-day goods.

Since FY2009, carriers have set several numeric targets in order to further promote recycling activities. Last year’s achievements per target are listed below.

The MRN collection rate declined slightly and fell below the target. This likely reflects the continuing popularity of smartphones with numerous advanced features and we can assume that when upgrading handsets or switching to a different carrier, more and more consumers continue using the older smartphones for their ability to access wireless LAN networks even after the termination of their carrier contracts. Another factor which seems to have taken root is that consumers are provided with the choice of selling their old devices for re-use when buying new models.

2. Survey on User Awareness and Behavior

An annual survey of two thousand mobile phone and PHS users was conducted to gain a better understanding of recycling perceptions and behavior.

As a way to increase awareness of recycling activities by MRN, efforts will continue to provide information on websites, catalogs, manuals and billing material. Emphasis on activities such as posters introducing MRN at stores specializing in mobile handsets, stickers, pamphlets/leaflets, coverage by the press as well as working with local authorities who are responsible for trash collection will continue. In order to promote collection, we will strengthen efforts to provide guidance at specialty stores when users change models or terminate their contracts.

(2) Increasing the opportunities for collection