The Communications and Information network Association of Japan (CIAJ), a general incorporated association, released its “Mid-Term Demand Forecast for Telecommunication Equipment,” covering FY2017 through FY2022. Reflecting the ever increasing importance of global markets, global flow figures (Out-Out, Out-In) were added to actual figures and figures are grouped first into equipment categories before indicating domestic and global markets. These changes will allow for more detailed analysis of changes in domestic and global markets for both actual and forecast figures.

The telecommunication market witnessed longer replacement cycles of mobile phones, while rapid penetration of smartphones came with a spike in traffic, leading to increased investment in radio and wireline network equipment, but the investment cycle subsided in FY2016. However, the overall economic recovery from the latter half of FY2016 and the pursuing rise in demand is expected to result in positive growth for FY2017. Although the market is foreseen to shrink temporarily as Japan goes through economic and social restructuring, it is expected to gradually pick up again through FY2022. Positive forces include efforts to increase productivity to cover for labor shortages, simplifying workplaces to make it more friendly for older workers, increased services and products utilizing IoT and AI, as well as demand related to 5G and autonomous driving technologies.

The Japanese economy in first half of FY2016 observed a stronger yen and a slowdown among emerging markets, but their impact dwindled in the latter half. Helped by stronger consumer spending, especially for mobile phones and clothing, and signs of recovering exports and capital spending among businesses, actual GDP recorded the second consecutive growth at 1.3%. Lower replacement demand for mobile phones, which makes up a large portion of overall demand, a reluctance among businesses to make capital investments in enterprise equipment and networks facilities from the slowdown among emerging markets contributed to the negative growth. The total telecommunication equipment market figure for FY2016 was 3.537 trillion yen, or a year-over-year negative growth of -4.2%. Positive growth was recorded in the 4 categories, including fixed communication equipment, LAN switches and cordless telephones.

As Japan continues to undergo gradual recovery in FY2017, the outlook for real GDP is 1.6% (the average of figures announced by 9 private sector research institutions as of November). Growth in consumer spending and corporate capital investments in networks and enterprise equipment have led to the CIAJ forecast for telecommunication equipment demand in FY2017 of 3.651 trillion yen or a positive year-over-year growth of 3.2%. Seven equipment categories are forecast to record positive growth, including mobile terminals (for public network use), office-use multi-functioning facsimiles, fixed communication equipment, multi-functioning personal facsimiles, optical access equipment and base station equipment.

New demand creation is forecast from FY2018 onwards, the total market value in FY2022 is forecast at approximately 3.644 trillion yen, an increase of 1.1% over FY2021, or a 3.0%growth over the FY2016 figure. The 6 equipment categories forecast to record positive growth over FY2016 include base station equipment, mobile terminals (for public network use), fixed communication equipment, digital transmission equipment and optical access equipment. 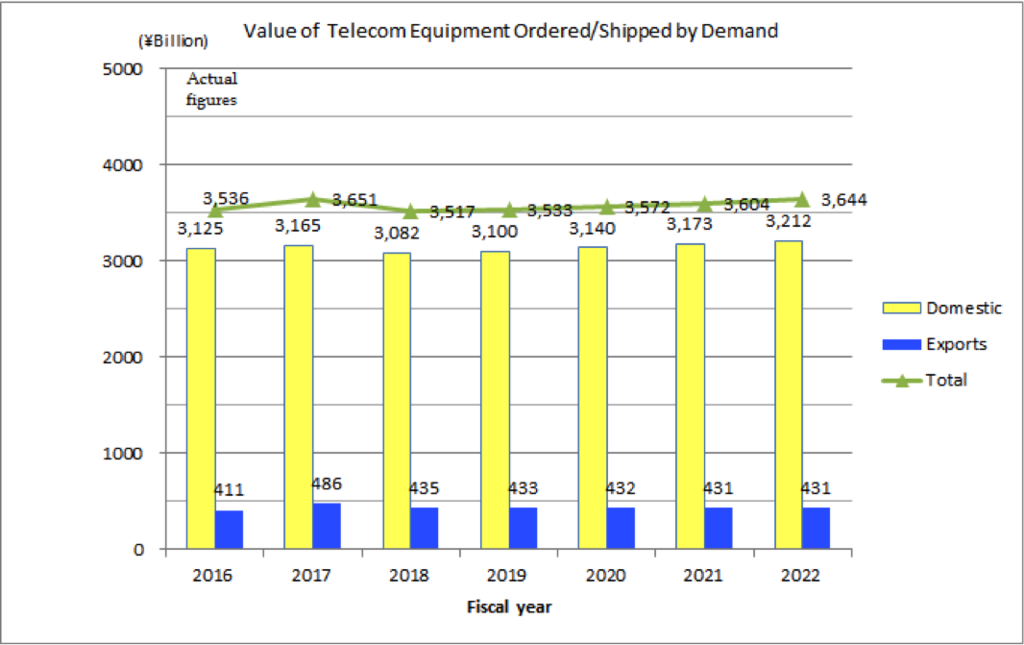 On the other hand, the domestic market (carriers + enterprise) was 106.5 billion yen (-5.0% year-over-year growth). The most recent round of investments in providing FTTH services to remote areas and measures to accommodate rising traffic from the popularity of smartphones have subsided, pulling the figure downwards for the carrier market. Businesses and the public sector have been increasingly embracing smartphones and other mobile devices and strengthening their networks to accommodate the surge in traffic, resulting in a relatively unchanged number of devices shipped, but the drop in unit price per port caused the yen figure to drop below the previous year.

The FY2016 total for equipment/parts categories not included above was 169.5 billion yen (-4.6% year-over-year growth)

A rebound from the tightening regulation over extreme discounts on terminals in 2016 is expected for mobile terminals (for public network use). The value of shipments for the domestic market in FY2017 is forecast to indicate +4.0% year-over growth, while exports decrease by 14.9%. Moderate demand for cordless phones, personal facsimiles and multi-functioning personal facsimiles are expected among older adults, with additional features keeping prices relatively stable, but as frequency of use and replacement cycles becoming fewer and longer, the number of units and total value of shipments are expected to show a gradual decline. FY2017 figure for the domestic market is expected to decline by 3.7%, while exports grow by 20.0%.

Replacements are central to demand for key telephones, PBXs and office-use cordless phones. The forecast for the FY2017 domestic market is -10.3%, with exports -1.4%. The migration from simple office-use facsimiles to multi-functioning facsimiles continues, with multi-functioning facsimiles making up the bulk of exports. The FY2017 domestic market is expected to decline by -4.8%, while exports are forecast to grow by +24.2%.

The domestic market for routers, LAN switches and optical access equipment is greatly swayed by investment plans of the telecom carriers and is expected to grow by +0.6% in FY2017 and exports grow by +15.3.

The FY2017 total for equipment/parts categories not included above is expected to be 168.0 billion yen (-0.9% year-over-year growth)

The global mobile phone market (includes smartphones) is expected to continue growing, mainly from low-end smartphone demand among emerging markets. Looking at the breakdown by communication format, 5G devices will start making its mark around 2020 (diagram 1), and sales revenue in FY2021 is projected at 394.7 billion U.S. dollars (CAGR 2.8%).

The domestic market from FY2017 onwards will see longer replacement cycles for mobile phones, and muffled growth as measures to control the shift from MNO to MVNO take effect. However, SIM-free smart phones are expected to become popular, especially among MVNO subscribers, resulting in a basically flat outlook. From 2020 onwards, the promotion of new 5G devices should have a positive impact on the market. The total value of the domestic market in FY2022 for mobile communication devices (smart phones, feature phones, mobile wi-fi routers and M2M modules) is projected at 1.856 trillion yen (+3.3% growth over FY2016, see diagram 2), with exports at 15.2 billion yen (-62.0% growth over FY2016)

Some additional features making it more difficult for scam artists and unwanted callers from getting through to subscribers will keep prices for some cordless phones, personal facsimiles and multi-functioning personal facsimiles, but overall demand is expected to shrink. The total value of the domestic market in FY2022 is projected at 21.1 billion yen (-30.0% growth over FY2016), with exports at 24.9 billion yen (-3.3% growth over FY2016). 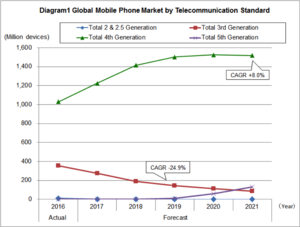 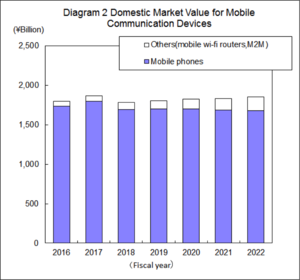 Accommodating rise in traffic, investments in data centers and 5G have led to the projection for the global market for digital transmission equipment of 16.286 billion U.S. dollars in sales revenue (CAGR 3.8%).

The figure for central office switching systems will be dependent on maintenance investment fluctuations. Fixed communication equipment figures will grow with investments in disaster prevention measures, backhaul demand and satellite launches. Investments towards 5G will lead to the domestic market value of base stations in FY2022 to become 623.1 billion yen (+15.8% growth over FY2016) and exports to grow to 50.8 billion yen (+31.6% growth over FY2016).

The global demand for routers among telecom carriers in emerging countries to enhance their infrastructure have led to the projection of 13.193 billion U.S. dollars (CAGR 1.5%), with the global market for routers targeting enterprise use growing in number of units as IoT platforms are built, but remain basically flat in value, as price per unit drops at 4.033billion U.S. dollars (CAGR 1.6%).

In the domestic market, telecom carriers are expected to make further investments in their facilities, such as data centers, and switch to more energy-saving equipment, so the number of units will rise, but the pressure to lower prices will also continue. There is also a trend to realize router functions with virtual technologies on standard servers, contributing to the FY2022 projection for the domestic market value of 103.3 billion yen (-3.0% growth over FY2016).

The FY2022 projection of the domestic total value for other equipment/parts not mentioned above is 173.4 billion yen (+2.3% growth over FY2016).

In the domestic ICT industry, value-added services, such as ICT solution businesses (system maintenance, server management/operation services), are expected to grow over the following years. Chapter 4 elaborates on this shift from telecom equipment to services in the ICT industry. It specifically focuses on (1) trends in cloud, IoT/big data/AI, security, SDN/NFV, (2) noteworthy applications of ICT in government growth strategies and (3) consumer facing services, such as 4K/8K contents and SNS, where growth from the use of ICT are expected.

Domestic market forecasts are based on statistics compiled by CIAJ, with the cooperation of cooperation of InfoCom Research, Incorporated, for areas not covered by CIAJ.

Global ICT market forecasts and demand trends refer to and utilize data and analysis provided by IHS Markit with the cooperation of InfoCom Research, Incorporated.